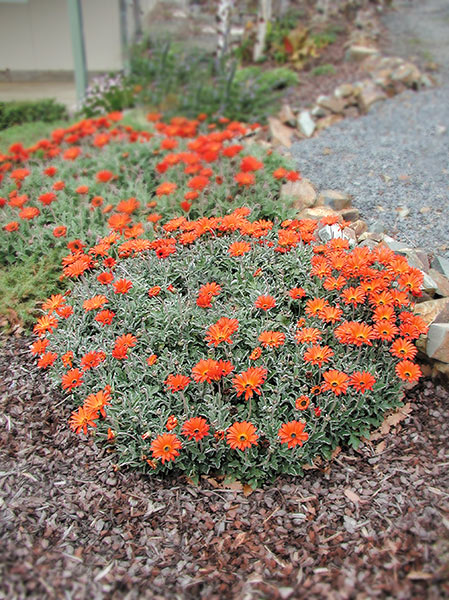 Delightfully ornamental ground covers with a showy display of large, daisy like flowers throughout the cooler months. The Silverdust range is so named due to the silvery undersides of the foliage which reach upwards creating a delightful foil for its floral display. Dry tolerant once established - they are a choice selection for low maintenance areas and as such are often utilised in public areas such as park gardens or median strips.

Arctotis are hardy perennials originating from South Africa and as such are well suited to similar conditions found around Australia.

The flowers rely on sunshine to open fully and so should be sited accordingly.

Select a sunny location in most soil types given that it is well draining. No pruning is required although removing spent flowers increases further production. Hardy and dry tolerant once established (approx 1 year) although an occasional deep watering during extended dry perionds can help maintain a 'fuller' appearance. An addition of a slow release fertiliser during spring would be beneficial.

Rock or gravel gardens, containers, mass planting, late winter colour. Forming a tight and low mound these evergreen ground covers are tolerant of dry conditions once established making them ideal for low maintenance areas. Particularly stunning varieties when mass planted where they double as a weed suppressants as well as being ornamental. Can be grown in larger sized containers.

Colour Schemes: All in the range are in citrus tones making them most suited to a 'hot' colour scheme that could include reds (in restrained amounts), other oranges and yellows, deep purples and blues, greens and silvers.